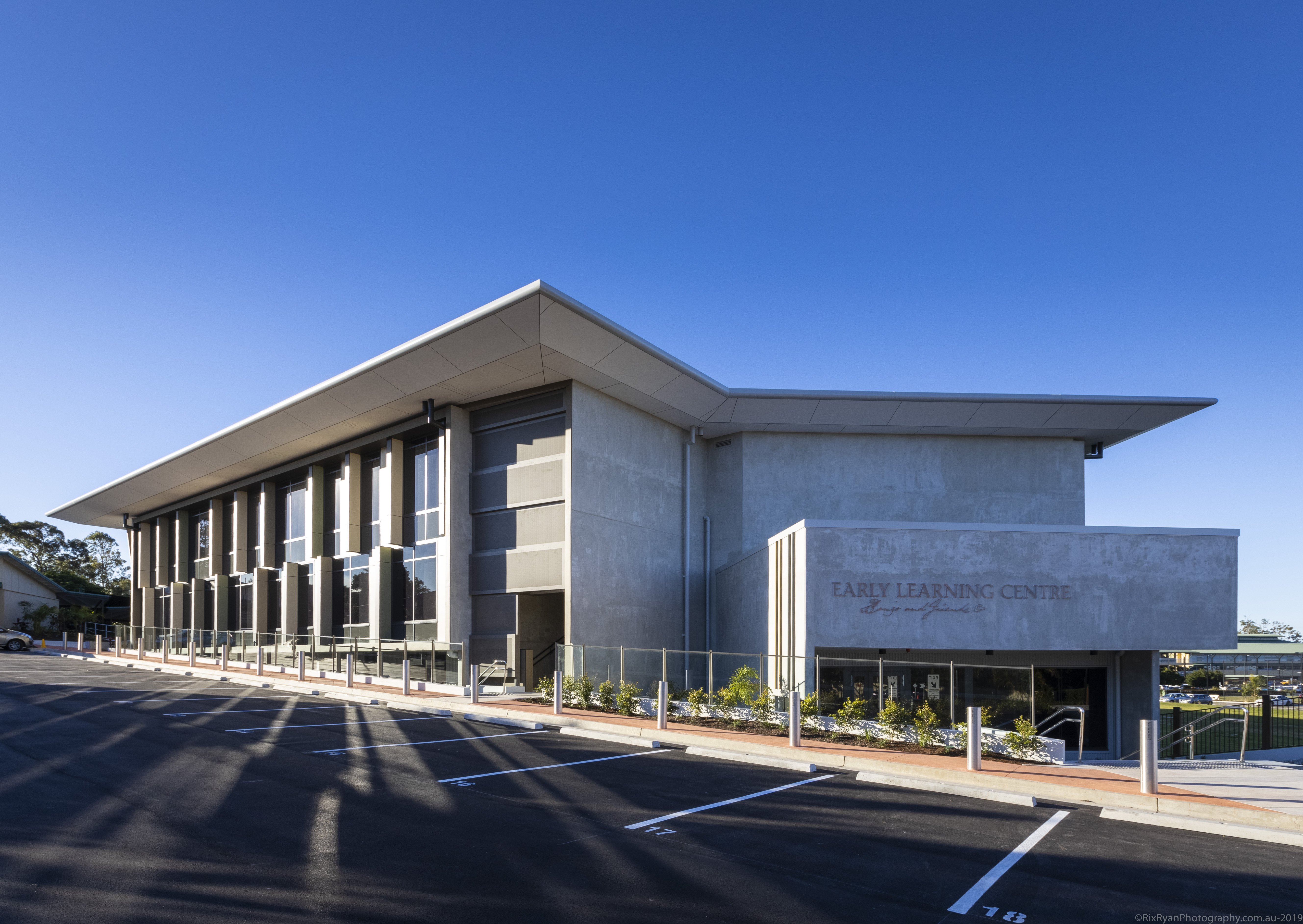 An impressive $13m learning precinct featuring state of the art design and technology has been unveiled at a preparatory school campus on Queensland’s Gold Coast – with its architects utilising ARCHICAD at each step of the way.

Six years in the making, The Winton Centre at A. B. Paterson College (named after the iconic Australian poet commonly known as ‘Banjo’ Paterson) features 4,500sqm of dedicated learning spaces, along with a library, film studio, 160 seat lecture theatre and rainforest-themed playground. Burling Brown Architects provided full architectural services for the design development phase, and also assisted during construction through to completion.

“We’ve been working with A. B. Paterson College as their architects for quite a number of years on the upgrade and expansion of their premises,” explains Burling Brown’s Andrew Brewer. “For this particular project the principal and College board were dedicated to create a space which would facilitate new aspects of learning and set a benchmark for education precincts on the Gold Coast.”

The aim was to design a building which engendered good feelings and a healthy environment for learning, and the team at Burling Brown were up for the challenge. “It was certainly a largescale project with a large proportion of civil works included in the scope. We went through a form-finding process,” Andrew says of Burling Brown’s approach. “Once we had an idea of how the spaces might flow into each other, we then started working out the volume and size of the building in ARCHICAD schematics, so we could provide the client with an indicative form of how the building might look and the spaces within the structure.”

Of particular note in this process was Burling Brown’s use of ARCHICAD to provide IFC models which were then utilised for all structural work. “For us, IFC models are a really helpful tool that allow us to coordinate 3D aspects with our consultant and technical services,” Andrew explains, adding that in this project Burling Brown both imported and exported IFCs. “We were able to import the mechanical 3D services into the live ARCHICAD project along with the structural steel, concrete beams and so on. We were also able to export our ARCHICAD model as an IFC and pass it on to our collaborators who were working with other programs so they were able to use it.”

Andrew says the use of IFC models proved particularly beneficial once construction commenced on site. “The builder’s steel constructors produced their drawings in 2D, which is standard contractual practice, but they also provided their real life steel workshop drawings as IFC models, showing literally all the nuts and bolts within the model, and that allowed me in one instance to identify a particular clash with the structural steel beams which no one had picked up in the 2D drawings – once we overlayed their IFC model with ours in ARCHICAD, we saw at once there was a clash. The structural engineer, the building construction group representative, and myself were then able to come up with a solution which would visually, structurally and cost-effectively get the problem resolved without impacting on construction.

“Had we not had ARCHICAD’s IFC capabilities, this might only have been identified on site and would have had to be dealt with there and then, which certainly would have cost the client money.”

IFC modelling, of course, ties in with Open BIM – digital building information modelling that combines geometric and construction components data and utilises open format collaboration, and which many regard as essential to the future of the industry. “In my opinion ARCHICAD has been very advanced for a long time in that regard, compared to other programs,” Andrew affirms.

“As we move forward into a greener future for building, this kind of functionality allows us to effectively model up a building and translate technical data into energy solutions, which is going to be increasingly critical. With ARCHICAD’s 3D modelling we’re able to be proactive in identifying clashes in the structural, mechanical and electrical interfaces within the design that would otherwise cost our clients money.”

Andrew has been with Burling Brown for seven years, but the firm’s relationship with Central Innovation and ARCHICAD goes back much further than that. “I wouldn’t characterise it as a relationship, but a partnership between Central Innovation and ourselves. We’ve always been an ARCHICAD office and I believe we’ve been getting ARCHICAD licenses from Central Innovation since the software first came on the scene. We would have been one of the first offices taking it up and I can see in our archives the transition from the old days of hand-drafting to those initially pretty basic CAD drawings – which of course would have been quite advanced for the time. And of course today we’ve become very advanced.”

“Naturally, as in any computer application, you do get glitches sometimes, so we have an online log where we’re able to log any issue that might be consistently occurring, and Central Innovation have always provided us with feedback or a solution within a very efficient turnaround time. As we know, this is a fast-paced industry, so for us to get the assistance and support we do from Central Innovation is very much appreciated. Whenever we’ve had an idea around a way of speeding up a process, we’ve given that feedback to Central Innovation and we feel that’s always been taken on board.

While Burling Brown does much of its own training inhouse, Andrew acknowledges, “We do have a couple of ARCHICAD gurus in our office and anytime there’s a Central Innovation training session locally available we’ll consider sending them over to pick up the latest knowledge and then come back to spread that around the staff. On a Friday afternoon we’ll usually sit new staff down with the more experienced ones over a few drinks and teach them a couple of tricks – we share knowledge around to ensure a consistent workflow within the office.”

“ARCHICAD has been great for us because of its 3D functionality which has always been a strong selling point in communicating to our clients what the project is going to look like before construction starts. Some of them understandably struggle in conceptualising how a 2D drawing will translate into a 3D building and space, and the use of ARCHICAD has enabled us to perfect that 3D ability and pick up more work as a result. It’s terrific to be able to give clients such a sophisticated 3D model that they can fly around in BIMX to get a comprehensive feel for the project.”

Burling Brown currently has 15 directors and associates using ARCHICAD –“we have a reasonable number of staff, and with two universities here on the Gold Coast educating students in architecture, we’ve been taking more and more on. We’re lucky to be busy enough that we’re able to do that – so we are certainly getting to the point where we’ll need some more licenses!”