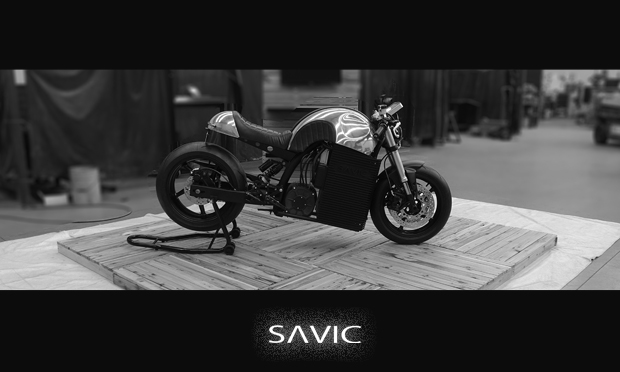 At this year’s Moto Expo in Melbourne, entrepreneur and inventor Dennis Savic is unveiling the prototype of his new concept electric motorcycle.

The Café Racer inspired design is the culmination of some 650 hours of work and a long-held dream which the 26-year-old can trace back to the age of six when he sat in a restaurant with his parents and sketched an original engine design on a napkin.

“That was the start, but I forgot about that moment until I was about 21 and visiting the Mercedes-Benz Museum in Germany,” Dennis recalls. “I saw the same radial engine configuration that I’d sketched, there in the museum on some WW2 aircraft, and it was a big revelation – it solidified in my mind that the automotive industry is where I always wanted and needed to be.”

“My final year thesis was a chassis for an electric motorcycle, so going down that path has been in my mind for a long time,” he says. After graduating in 2014, he put a team together and began working towards his first prototype, while simultaneously pursuing his studies for an MBA, which he completed in April this year. “Looking back, almost all my decisions were made to position myself so I would be able to lead a team and have the capability to develop this kind of product,” he says. “I’ve always had this long-range goal in mind.”

Dennis set himself the task of designing and producing Australia’s first range of electric motorcycles, which would boast advanced features and functionality including instantaneous torque, rapid acceleration and vastly reduced environmental impact.

From 2015 through to the end of 2016 he and his team completed two prototypes – the first a Yamaha R1 conversion, and the second a complete design and fabrication from the ground up. “We had a lot of lessons to learn, and went back to the virtual drawing board through 2017,” Dennis says. “We finally developed a scope and a plan for what is called the C-40, which is the third prototype and builds on our previous ones.”

A year ago the company relocated from Perth to Melbourne to be closer to the Australian automotive industry and start building the new concept prototype.

“Central Innovation has been very useful. Whenever I’ve had a question, they’ve had an answer within 24 hours and proven themselves extremely willing to help. We will probably need much more technical assistance once we venture into PDM, and I feel very confident that Central Innovation will provide great support going forward, especially given the level of assistance they’ve offered so far.”

Dennis had taught himself to use SOLIDWORKS at uni and soon became so proficient on the platform that he was asked to teach others how to use it – expertise that he has since been able to put to use at Savic Motorcycles. “I approached Central Innovation in April and we discussed some commercial partnership options, and I was able to secure a commercial SOLIDWORKS license at a great price and since then we’ve charged on with developing all our production CAD in SOLIDWORKS.

“The great thing about SOLIDWORKS is that it’s used across 90 to 95 per cent of our current supply chain, so it makes sharing our CAD data very simple and straightforward. And I’m really looking forward to SOLIDWORKS 2019, as I gather that the large assembly management speed has really increased and that will be a very beneficial feature when you’re working on a model as large as a motorbike.

“Once we get our next round of funding, the plan is to implement Product Data Management, Model Based Definition and probably Visualize Pro as our three key SOLIDWORKS products. I want to get the maximum utilisation out of the platform as that will really facilitate not only the production processes but also the marketing through Visualize Pro.”

Dennis adds that Central Innovation has proven to be extremely responsive and helpful. “They felt I had a strong concept and business case at the outset and they’ve been really supportive ever since. I do know the basic SOLIDWORKS platform pretty well, but I didn’t know Visualize at all and I hadn’t used MBD.

“Certainly in terms of listening to what our requirements are and then offering the right solution, Central Innovation has been very useful. Whenever I’ve had a question, they’ve had an answer within 24 hours and proven themselves extremely willing to help.

We will probably need much more technical assistance once we venture into PDM, and I feel very confident that Central Innovation will provide great support going forward, especially given the level of assistance they’ve offered so far.”

Having received some seed investment, Savic Motorcycles is planning a capital raise for the beginning of 2019. “We’ve had four key milestones to achieve this year – a compliance plan, a business plan, a prototype and the development of a supply chain. We’ve managed to achieve all four on time and under budget so now we’re going ahead with a production power chain development and a media launch at Moto Expo as well, so we’re pretty happy with our performance this year.”

The plan is to complete the capital raise by the end of February and build 10 production prototypes in 2019 which will be founder edition models – “We’re hunting for our first 10 customers and we’ll start collecting production orders at the Moto Expo as well,” Dennis says. This will probably be followed by a further capital raise and then the first major production run of 50 to 100 units in 2020, if all goes to plan.

The motorcycles will be manufactured in Taiwan and Melbourne and assembled in Melbourne, and sold initially within Australia before moving into international markets. Savic Motorcycles is launching its C-series production line with three models – the Alpha (with 60kW power rating), Delta (40kW) and Omega (20kW). Each features a rolled backbone frame, Savic’s own powertrain package designed in SOLIDWORKS and a fully integrated liquid cooled motor and energy storage system. And each comes with several battery pack options, from the largest size providing a range up to 250km and the smallest that of 50km. This is important as the size of the battery impacts the price of the vehicle.

“It means we can tailor each bike to a customer’s needs and it’s important for us to have that agility and flexibility,” Dennis points out. “We’re trying to cater to as much of the market as possible within a single product line, while minimising the investment costs required to get these vehicles into production.”

Take advantage of our great E.O.Y offers! Please fill in the form: we’ll contact you within shortly.
Thank you.