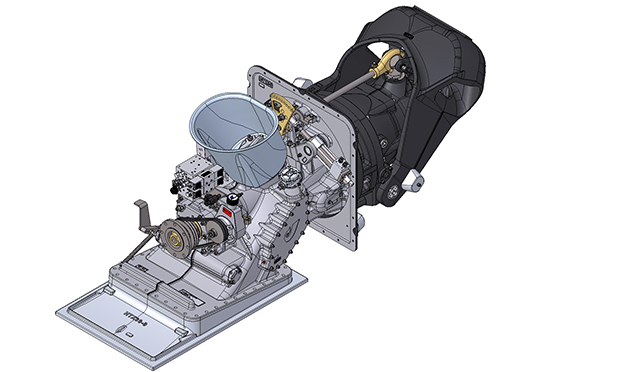 New Zealand-based HamiltonJet is a pioneer in the design and manufacture of waterjet impellers, a form of marine propulsion which offers advantages over older technologies such as outboard motors and shafted propellers.

Waterjets generate thrust by discharging a high-velocity jet of water towards the rear of the craft. This impels a reaction force in the opposite direction which transfers through the body of the jet unit to the craft’s hull, propelling it forward. With fewer moving parts and most components inboard, waterjets provide greater reliability, better manoeuvrability and optimal speed.  HamiltonJet sells its products all over the world, designing and supplying waterjets for a wide variety of inshore and offshore vessels from recreational boats up to large military crafts, and has been evolving the technology since the early 1950s.

Today its products cover waterjets and related control systems, which include such advanced features as JETanchor, enabling a craft to hold its position automatically using GPS tracking. Demand for greater complexity in the finished product has naturally brought with it a corresponding sophistication in design methodology. “We started on the drawing board, then moved to CAD software in the early 1990s, and since 2004 we’ve been using 3D modelling,” says HamiltonJet CAD Manager Blair Doak. “SOLIDWORKS was the
first 3D package we went to and today the design of the waterjet unit and its associated hydraulic and electronic controls is all done on that platform.”

This initial use of SOLIDWORKS established HamiltonJet’s relationship with Central Innovation, which has grown closer over time as HamiltonJet has expanded its use of SOLIDWORKS across further areas of its business. “We started off with SOLIDWORKS for the design teams but over time that’s expanded to include the toolroom and manufacturing engineers, and this latest  license will be used for process design as we’re developing a new factory.”

We also use SOLIDWORKS Composer to generate content for our product manuals, creating images using SOLIDWORKS files before exporting them into the layout/publishing application.

“SOLIDWORKS is easy for our designers to use, and because it’s integrated throughout the rest of the business, it makes it simple to design casting moulds and fixtures to support the product through the production process. It is an integral part of the business today and we rely on it pretty heavily to get our product to market.” Blair Doak, CAD Manager, HamiltonJet

In recent times HamiltonJet has also utilised Central Innovation’s support team to assist in resolving some design issues related to how staff were using SOLIDWORKS. “We had taken on a major new product this year with a complex structure. By bringing Central Innovation in to fine-tune the process, it helped us find efficiencies,” Blair explains.

“Being able to readily access that sort of support was extremely beneficial and certainly made our job a lot easier. Having Central Innovation Field Engineers who can come around at reasonably short notice and troubleshoot on site is very handy.” In this case, Central Innovation’s Field Engineer came in several times, examined some of HamiltonJet’s large SOLIDWORKS assembly files, then took them offsite for detailed analysis. “He came back with a report which identified the problem areas and where there was potential for improvement.

It was great to get that fresh perspective on what we had been doing and insights into how to attain a best practice approach. Thanks to Central Innovation’s assistance, opening times are down to ten per cent of their previous time, which is a massive improvement. “We’re now about to start on another new product and with the knowledge we’ve gained from Central Innovation, the goal is to fundamentally model it in a better way so we get even better opening speeds this time round. So hopefully their help is going to pay off even more in terms of greater efficiencies moving forward.”

Take advantage of our great E.O.Y offers! Please fill in the form: we’ll contact you within shortly.
Thank you.